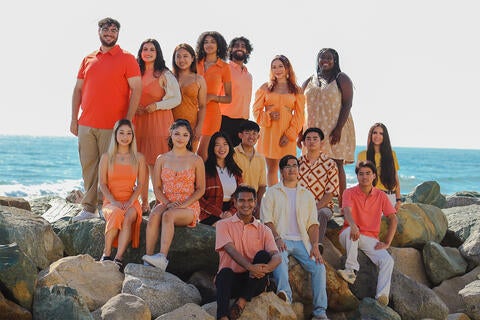 The office of ASPB is dedicated to programming quality campus entertainment for the undergraduate population at the University of California, Riverside that appeals to the diverse communities and enhances campus vibrancy.

The Associated Students Program Board (ASPB) is a student-run programming entity on the UC Riverside campus. Established in 1986, ASPB is funded by quarterly feeds paid by undergraduate students. The board is comprised of 15 full-time undergraduate students who work primarily, though not exclusively, in the following six divisions: Concerts, Special Events, Films & Lectures, Contemporary Culture, Marketing, and Leadership. The first four programming divisions plan events (both large and small); all programs are voted on and approved by quorum of the board. The other two divisions provide support essential to the success of the events and the respectively. All 12 directors, the vice chairperson and marketing chairperson hold votes in program requests proposed by the board.

ASPB also hires a total of five volunteers in programming in the spring and fall of each school year — each volunteer belonging to either the Concerts, Special Events, Films & Lectures, Contemporary Culture, Marketing, or Membership divisions. The volunteers contribute to the development and implementation of all events while supporting their respective divisions. ASPB also hires a group of volunteers for the events team who are not assigned to a particular division but instead serve all events.

Volunteers in the Membership team (overseen by the chairperson and vice chairperson) assist with the coordinating of all ASPB meetings, regular socials, birthday recognitions and appreciation cards. They will also help the Leadership division foster outreach opportunities in the UCR community and will gain strong professional development skills. The Membership division also assists Leadership with implementing the Quarter for a Cause initiative each quarter.

The Events Team is responsible for providing additional support for ASPB programming on the day of events, provide feedback, assist in promoting ASPB programs and initiatives through tabling, and help in any way that may be necessary.

In 2012 students passed a referendum to increase the program board fee in order to strengthen the level of entertainment that ASPB provides. Currently ASPB is completely student-led and student-funded. The referendum has allowed ASPB to be self-sustaining, to keep events FREE for UCR students, to secure a better range of current and relevant artists in today’s music industry, to enhance interactive event attractions, and to accommodate rising operational costs.